If you’re an undergraduate entrepreneur at USC, what’s your relationship with intellectual property?

As college graduates enter an increasingly competitive and global knowledge-based economy, intellectual property — driving more than $6 trillion in annual output and responsible for more than 80 percent of the collective market value of most publicly traded companies, has become a critical area for future entrepreneurs and business leaders.

To underscore this message, USC undergraduates were invited to a powerhouse lineup of I.P. professionals and thought leaders from Facebook, Disney, IBM, the Federal Judiciary and the United Nations for “Leveraging Intellectual Property in Today’s Knowledge Economy,” a panel discussion held Oct. 30 at Town and Gown.

Intellectual property refers to ownership of intangible assets associated with innovative ideas and concepts atop which virtually every aspect of our economy rests. Issues around the safekeeping of those ideas and concepts have an impact on American innovation and competitiveness.

It is an important topic for USC President C. L. Max Nikias, the holder of eight patents himself, and Gary K. Michelson, an inventor, philanthropist and retired orthopedic surgeon whose 2014 gift to USC named the Michelson Center for Convergent Bioscience.

“With today’s global markets, protecting I.P. is critical to economic growth,” Nikias said. “This is why Dr. Michelson is working hard to elevate the discussion, and tonight, USC partners with him.”

Michelson is a prolific inventor who holds more than 900 patents for spinal surgery implants, instruments and methods. In 2005, he sold a portfolio of inventions to medical device maker Medtronic for over $1.3 billion. Earlier this year he and Nikias co-authored an op-ed in The Hill, on the need to train college students about intellectual property.

“Just look around, whether it’s Facebook or it’s twitter or Google or Microsoft before them, all of these companies were started by people who were in this college demographic,” Michelson told the audience. “Whether they dropped out or not, this is the right time for them to understand the importance of intellectual property.”

If there was ever a way to get undergraduate students interested in the complex, ever-changing and sometimes maddening world of intellectual property, the evening’s panel was it.

Moderator Luke Dauchot, a partner at the international law firm of Kirkland & Ellis and instructor for USC Marshall’s first undergraduate class on intellectual property, joked that one of his students had referred to some of the course’s earlier guest lecturers as “big shots,” so to save time and forego customary introductions, he simply noted that the panelists “are all big shots.”

With that much experience in the room and only two hours to work with, the conversation was by necessity broad. Panelists touched on the U.S. patent system and how it’s keeping up with the pace of new innovation (or not); digital copyright protection; and the world stage — how does the U.S. system stack up?

Each of those topics could fill a semester-long symposium.

An impressive panel weighed in on a broad range of intellectual property topics in only two hours. (USC Photo/Steve Cohn)

Dealing with the trolls

In discussing the challenges facing the U.S. patent system, Facebook’s Lo, who was formerly deputy general counsel for patents at Google, spoke of the ongoing challenge of mitigating the non-practicing entities, who challenge patent holders in the hopes of being paid off to go away in lieu of the costly litigation.

“The challenge small companies had was they couldn’t afford to defend, so they really had a gun to their head, and they had to just pay to make these entities go away if they were going to try and build their companies,” he said.

Different industries experienced this in different ways, however, he said, and there’s been little agreement on how and if to reform the U.S. patent system.

Some on the panel argued that reform has gone too far.

“We’ve weakened the whole system from stem to stern in a way that’s very counter-productive for the needs of the country,” Michel said. “For job creation, for family income, for GDP growth, for global competitiveness, all of these important features have been weakened by the weakening of the overall patent system in an attempt to deal with the trolls.”

On the topic of copyright infringement, Da Silva, of the World Intellectual Property Organization, pointed to alternative solutions outside of the U.S.

“South Africa, for example, has established a joint task force that combines the intellectual property unit of its government together with its enforcement unit, and together they’ve created a new unit focused on combination of education and enforcement,” she said. “They emphasize the value of creativity that anyone can aspire to, either for personal or commercial gain.” 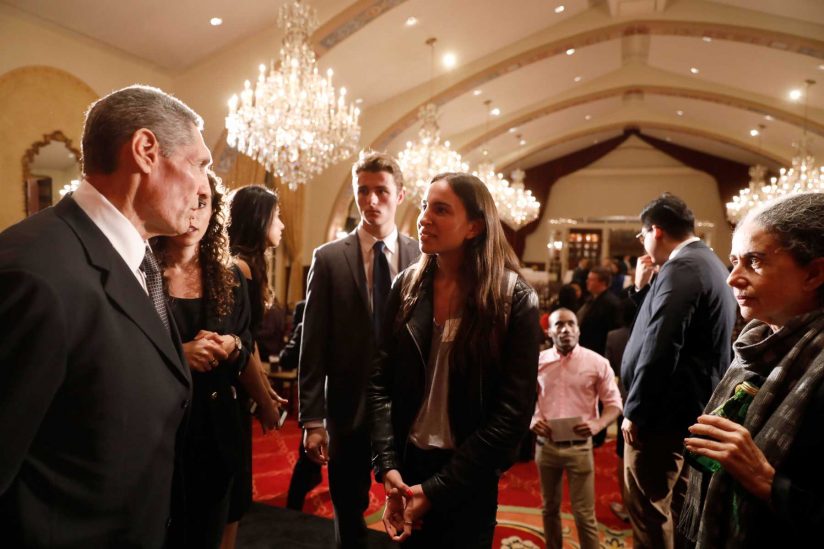 USC Marshall offered one of the very first classes on intellectual property aimed at undergraduates when it created and launched “The Entrepreneur’s Guide to Intellectual Property” in the fall. The class, led by Dauchot, introduces the fundamentals of patent, copyright, trademark and trade secret property; demonstrates how intellectual property is put to work; and prepares students for the social and economic implications associated with I.P. at work. It is open to all USC undergraduates and offered within the Lloyd Greif Center for Entrepreneurial Studies.

As the discussion wrapped up, students surrounded the speakers, eager for further questions. Dauchot looked pleased.

“I.P. is important,” he said. “The aim of the course, and in particular this evening’s gathering, is to impress on everyone that I.P. has consequences. If we get everyone to appreciate just that much, I consider it a victory.”