The Intellectual Property Owners Education Foundation (IPOEF) awarded its 2022 IP Champion honor to Dr. Gary K. Michelson, a board certified orthopedic spinal surgeon, inventor, and founder of the Michelson Philanthropies network of foundations. The ceremony was held December 7 at the National Building Museum in Washington, D.C.

“Gary is the most deserving person one could imagine for the IP Champion Award,” said David Kappos, former director of the United States Patent and Trademark Office (USPTO). “He has put enormous resources at play. He truly is the champion of intellectual property understanding.”

The IP Champion award recognizes extraordinary leadership in advocating for the value of intellectual property to stimulate the progress of innovation.

The four IP Champions are united by a belief in the value of IP, perseverance in their fields of work, and commitment to making IP more accessible. As a non-profit organization, IPOEF is devoted to educational and charitable activities designed to teach about the value of IP rights and encourage innovation. The foundation is committed to promoting an understanding and respect of IP rights and their value for society.

“I cannot think of a more deserving individual than Gary Michelson for the IP Champion Award,” said Louis Foreman, former president of IPOEF. “He has put his effort, his mind, and his dollars behind his actions. He’s done so much to inspire the inventor community and educate them in the process.”

A holder of more than 950 patents, Dr. Michelson has long championed a strong patent system and the value of IP protections. In 2016, he established the Michelson Institute for Intellectual Property (Michelson IP) at his education nonprofit the Michelson 20MM Foundation, providing free IP educational resources for inventors and entrepreneurs, with a strong focus on underrepresented communities.

Michelson IP produces various free high-quality IP resources including an interactive digital text and introductory college textbook that makes patents, copyright, and trademarks understandable for students and non-lawyers. Michelson IP also developed an animated video series that breaks down the content into digestible 3-4 minute videos, and a comprehensive online course available at a global scale on the Udemy platform. More than 20,000 students worldwide have taken the course since it was introduced. Nearly 400 institutions have embedded Michelson IP’s resources into their curricula.

In 2021, Michelson IP also partnered with Historically Black Colleges and Universities (HBCUs) to launch the HBCU IP Futures Collaborative, bringing IP curricula, resources, and grants to participating institutions. This year, one HBCU student who received IP education through the Collaborative went on to invent a fast food automation machine and file for a patent with the USPTO, which is currently reviewing the application.

“Gary Michelson has created an institution to carry out his vision of educating everyone in America about the importance of IP to all of us,” said Paul Michel, a retired judge from the U.S. Court of Appeals for the Federal Circuit. “The Michelson 20MM Foundation has created courses for students at all levels, it has published books to instruct people, it has put out other forms of education.” 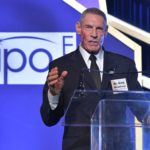 Learn more about the Michelson Institute for Intellectual Property: